Why We Launched Final on Product Hunt, Instead of a Traditional Press Blast

Tl;dr — because it’s a community of smart people you can genuinely engage with.

A Little About Us

Final is a credit card built for consumers - one that addresses the insecurity of a static card number. It’s our solution to a set of problems surrounding breaches, fraud, and canceled cards - pains we’ve experienced too many times. For us, the cause of that pain is a lack of user control.

Without sounding ingenuous, at our core we believe ourselves to be a consumer advocacy company. Because of that, it’s crucial for us to listen to potential Final users as often as possible. And that’s one of the main reasons we love Product Hunt - it gives companies an opportunity to deliver the message themselves, without distortion. This is particularly important with new tech that isn’t easy to explain. And then, hopefully, the companies can not only listen to the reactions, but participate in the discussion.

I also want to preface by saying that this is not a Product Hunt vs. traditional press coverage discussion. You need both. This is a groundswell vs. top-down discussion, and how one before the other can help you to understand your audience and adjust your messaging before having a half million eyes on it.

By launching on Product Hunt, we were able to be honest (and somewhat vulnerable) to a community of entrepreneurs, investors, and first-adopters. It gave us a chance to really absorb what concerns were being voiced, what features people were most interested, and which were most confusing. Using that, we immediately adjusted some of our web copy and FAQs to address those, and even tested a few other title tags and headers to better describe the control features.

Had we gone with a launch in traditional press and tech blogs, even if they were top tier, the sentiment is completely different. It’s a “here’s a thing, you should use it,” instead of a, “here’s our thing, what do you think?” And while traffic from those sources can be significant – you really miss out on the opportunity to engage with the community of interested individuals and promoters. When was the last time you saw the CTO & CEO answer questions in the comment section of a WSJ article?

Let’s say you pitch to three top tier outlets, all three pick you up within a few hours of each other, and point several hundred thousand visitors to your website. Realistically, you haven’t fully optimized. Why? Because this is your launch. And your website has two typos (like ours did during PH), a lackluster FAQ section, and an headline/ tagline that is non-descriptive…not a great first impression, and probably a lower conversion rate and a subsequently higher CAC. Well, unless you expect to get two bites out of the same apple with a fundraising article three weeks later in the same publication, you blew your opportunity before you were ready.

You get a lot of people to weigh in; positive and negative comments, both are valuable. You get feedback from a group of people, some of which may even be in your target demographic. Like a beta user, they help you adjust your offering by testing it out and giving you blunt feedback, and your executive team can immediately respond to questions. You can also see which questions trend, and then adjust your public-facing content to address those questions. And if you engage often and quickly? You can (show) that there are real people behind your company, and immediately ingratiate yourself with potential brand ambassadors.

There’s a majority of negative feedback. You learn from that feedback, and can adjust your messaging, feature set, and possibly even the product itself to address those issues. And you did that with a group of startup-savvy people who understand that technology is in a constant state of flux, and that companies are people, and people make mistakes. Even the worst-case scenario is a form of iterative progress. It’s also important to note that in this scenario you kept your press powder dry to be used at a later date.

Product Hunt is Only Going to Get Bigger

As the number of eyes on that site grows, the bigger impact a great announcement on PH can have. But with all that said, “results may vary”. We had an amazingly successful launch on Product Hunt - over a thousand votes, which puts us at #3 of all time (behind Product Hunt’s own app & Gmail’s Inbox). It’s clear we struck a nerve with Final. But if that’s not the experience you have, don’t fret - Product Hunt shouldn’t be seen as a major acquisition channel. Use it to dialogue with the first people who would use your thing, ask them questions, and be open to their feedback.

Hacker News is also a great place to accomplish this kind of engagement, even if there is some audience overlap - we posted and saw an incredible amount of referred traffic, but more importantly, got involved in intelligent discourse on where tangentially-related fintech products have failed, and where Final can deliver a solution to a painfully acute set of problems.

Parting words: being #1 on PH for the day shouldn’t be your focus; the community will do that for you. Your focus should be engagement; timely, honest, receptive engagement.

Now for some screencaps of our analytics, if those kinds of things interest you. 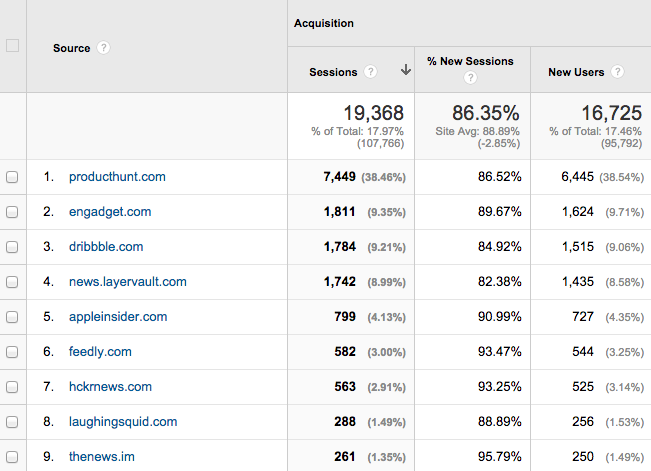 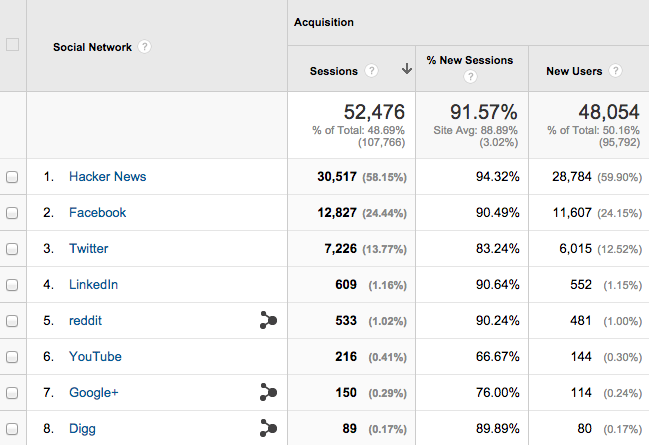